How Agribusiness is benefitting from Hyperconverged Infrastructure

Competition is fierce in the agribusiness sector; margins are slim and efficiencies are a must. Innovation is key to success. Here, our clients Aurivo explain how their Agribusiness is benefitting from hyperconverged infrastructure.

Sligo in the Northwest of Ireland is home to Aurivo, one of the bigger dairy companies and second largest milk producer in Ireland. Here grass-fed cows produce some of the best milk in the country. Our organization is an agri-business leader that sells milk and butter products under the Connacht Gold, Organic For Us, and Donegal Creameries brands, and animal feed under the Nutrias label. We also operate the Homeland chain of agri and hardware stores.

Efficiency was Limited by Poor Processes and Insufficient Processing Power

At Aurivo, part of our ethos is that innovation is in our DNA, and we are tasked with doing a lot with limited resources. This also applies in IT. I work for the Head of IT, David O’Sullivan, in a team of eight people, three of whom work on infrastructure, and another four who implement and support business applications.

I started at Aurivo in July 2018 and inherited a legacy VMware data centre that was nearing its end of life. It was inching along at a snail’s pace on IBM System X servers connected to an obsolete IBM SAN over iSCSI.

We were trying to run modern applications, but insufficient processing power and throughput were throttling performance. We were also running nightly Veeam backups that were taking snapshots of our virtual servers and then routing them to our SAN.

This process was unwieldy. There was no way to clean the backups, and we were always running out of storage space. It was also eating up system resources, shutting down virtual servers, and forcing applications and services offline. Managing the environment was time consuming and difficult.

One of our primary pain points was a retail platform which provides sales and inventory data and runs on virtual servers using a Java/Oracle front end.

Core, our retail and milling solution, was compiling reports overnight, thus competing with Veeam for resources. Our virtual machines and our physical hosts were under pressure. Over the years, these processes had become slow and were spilling over into daytime activities.

The other critical issue was disaster recovery (DR). We lacked this capacity in-house and had contracted DR to a company that backed up our VMs in near real-time to a data centre in Cork.

If a server ever failed, we could bring it back online from this secondary site, but this was an expensive and suboptimal solution. We wanted to bring our DR in-house and refresh our ageing infrastructure.

The issue was never VMware. We were happy with this virtualization technology, but it was running on outdated infrastructure. It wasn’t just a matter of speed or capacity. A whole new type of data centre architecture had reached maturity since we last refreshed our equipment. We were ready to look at hyperconvergence.

There was no eureka moment. We didn’t succumb to malware or suffer a major crash, but time was running out on our ageing data centre. At this point, we started exploring our options and met with the key suppliers of hyperconverged technology.

We began with Nutanix, but we were underwhelmed by their Acropolis hypervisor. Next, we looked at VxRail, but that was just shiny Dell servers wrapped around VMware vSAN.

We then turned to vSAN itself, but we were already running VMware, and we wanted a turnkey solution, not another multi-vendor environment that we’d have to architect and manage with our small team.

That left HPE SimpliVity. We were impressed with its single-pane-of-glass interface and the all-in-one architecture in a small footprint. We could replace multiple racks of servers with four HPE SimpliVity nodes, two at our primary data centre, and another pair 50 kilometres away at our second data centre.

We were ready to take the plunge. Replacing stacks of hardware with a compact primary cluster and twinning it with a secondary cluster was alluring. But was it too good to be true?

This setup looked good on paper, and our HPE partner, ProCloud, made a compelling case. They sat us down and explained the technology in detail. Their expertise and engagement were impressive, but this was terra incognita for our IT Team.

We needed confirmation that we were moving towards the right solution, and so ProCloud arranged reference calls with organizations that had transitioned from legacy VMware environments to HPE SimpliVity.

One such call was with Monaghan County Council, who had struggled with the same storage, performance, and backup issues that were challenges for Aurivo. It was a revelatory conversation. Our problems—and their resolution—were not unique to us.

Here was proof that we could move to HPE SimpliVity while respecting our budgetary and personnel constraints.

We signed the purchase order in December 2018 and started installing our HPE SimpliVity nodes a couple of months later, in February. The physical setup was only part of the picture. Upon going live, we implemented a new, automated policy-based backup system. 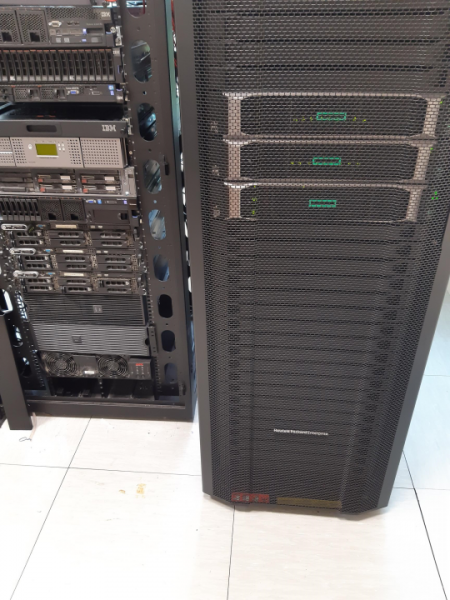 This tiered approach provides four levels of backup frequency based on the importance of the server or system in question. VMs at the bronze level are automatically backed up once a day. We back up platinum servers every half hour, and everything residing on the data store at our primary data centre is replicated to our DR centre at 15-minute intervals.

HPE SimpliVity’s single-pane-of-glass interface provides full visibility into all our backups across both primary and DR sites. We can open a window and see every image we have saved, and we can search for and recover a server from multiple snapshots in time, depending on the backup rules.

Our biggest headache is now in the past. Before we deployed HPE SimpliVity, we had no way of ensuring the integrity of backups until we tried to restore from a broken image file. Even then, we couldn’t tell if the failure was due to a corrupted hard drive, a faulty network connection, or insufficient destination storage.

There’s no such drama with HPE SimpliVity. The backup process is automated, repeatable, visible, and scalable. It just works. HPE SimpliVity’s OmniStack technology incorporates global inline deduplication, compression, and acceleration algorithms that speed up the backup process and allow us to store more information in far less space.

We are no longer worried about running out of storage space. Should the need ever arise, we’ll have plenty of advance notice, too. HPE SimpliVity supports HPE InfoSight and predictive analytics that simply inform us when we might run low on capacity.

Restoring a Server or a File in Minutes

In the event of the failure of one of our primary systems, we can spin up a backup image from the DR centre within minutes, thus ensuring business continuity.

In such a scenario, our team can continue to work at resolving the issue on the primary server. It makes no difference if it’s a software or storage issue, a hardware failure or a connectivity problem, the backup goes live and stays up while we formulate a solution.
HPE SimpliVity allows us to restore an entire server or a single file. Last week, we had to recover a corrupted SQL database on one of our servers. Instead of taking the entire VM offline, we spun up a recent backup in seconds and copied the database over. It was less than 90 minutes old, and next-to-no information was lost.
With Veeam, we had to restore the entire server to a separate VM, spin it up, log in, and then find a way to copy the file over using a USB key or a network connection. With HPE SimpliVity, it was all point and click. We located the most recent working copy of the SQL database in our backups, and then dragged it to the live server.

HPE SimpliVity has accelerated everything we do, not just our backups, restores, and multi-site failover. Part of it is raw processing power. We went from Sandy Bridge to newer Xeon Scalable processors that are 50 times faster.
Our move from traditional SANs to hyperconverged storage and computer nodes also increased data transfer rates by a factor of 18 from 55 megabytes per second to 961.

Our people are also reporting excellent performance with Microsoft Dynamics NAV. The ERP system was a constant pain point for end users, and the IT team was always dealing with processor and memory bottlenecks. Our accounting and purchasing teams were calling us every morning to complain about poor performance, and we were bending over backwards to optimize everything, but with little success.
Thanks to HPE SimpliVity, those phone calls have stopped. Our infrastructure and application support teams can now focus on providing a top-notch user experience to Aurivo staff instead of trying to keep ageing technology afloat.

A Bird’s-Eye View of Our Data Centres

We have also started using HPE InfoSight to monitor our HPE SimpliVity environment and pull up telemetry data and performance metrics. We can log into the InfoSight portal and get an at-a-glance view of our primary and recovery data centres on the fly.

We’ve only scratched the surface with HPE InfoSight, but we like what we’ve seen so far. It’s helpful to have a platform that provides a bird’s-eye view of our entire infrastructure and all our virtual machines, and which alerts us to potential and actual hardware and software problems.
We all breathed a sigh of relief the day we powered down our old data centre. We consolidated all our legacy hardware—including servers, hard drives, switches, cables, tape backups, and power bars—into four HPE SimpliVity 380 nodes.

Our people are also reporting excellent performance with Microsoft Dynamics NAV. The ERP system was a constant pain point for end users, and the IT team was always dealing with processor and memory bottlenecks. Our accounting and purchasing teams were calling us every morning to complain about poor performance, and we were bending over backwards to optimize everything, but with little success.
Thanks to HPE SimpliVity, those phone calls have stopped. Our infrastructure and application support teams can now focus on providing a top-notch user experience to Aurivo staff instead of trying to keep ageing technology afloat.

The operational improvements were instantaneous, and our costs went down significantly. Powering, cooling, and maintaining dozens of old servers, storage, and all the accoutrements come at a price. Eliminating these expenses was one of the knock-on effects of our new infrastructure.

As one of the country’s leading co-operatives, Aurivo has been bringing fresh dairy and fresh ideas to Irish kitchens for decades. Our customers are increasingly mindful of the food they eat. They want fresh, wholesome dairy products that are ethically sourced, environmentally responsible and produced sustainably. In many respects, we’ve been ahead of that curve, but dietary habits and culinary trends are putting new types of food on people’s tables, and we must evolve to meet changing tastes.

To learn more about our work with Aurivo, and other clients you can read a Case Study here.  For more information on how ProCloud and Hyperconverged Infrastructure can benefit your organisation get in touch, we would be happy to speak to you about future proofing your business.